A few weeks ago, I lost a good friend to cancer. Jerry Vogel was a great ministry leader who loved the Lord, his family, and kids ministry. Jerry and I were able to work together for almost 11 years. He was a great mentor and taught me a lot about ministry. He was known for his funny stories that he would tell during one of his many conferences he led over the years. Here are a few things that Jerry taught me during our friendship.

I could go on and on, but I’ll stop. Jerry was a man of God, a loving husband and father, and a champion of children. He left a legacy. I’m thankful I knew him and I’m excited for him that today he’s enjoying the fruits of his labor with our Savior. 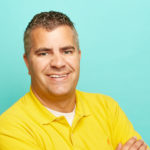 Jeff Land is Publishing Team Leader for Bible Studies For Life: Kids. He holds a BSW from Mississippi College and a MACE from Southwestern Baptist Theological Seminary. Jeff has served as children’s pastor and currently teaches second graders each week at his church. Jeff, his wife Abbey, and their four sons live in Coopertown, TN.